I have been recording podcasts for just over a year (the first episode of Birch Bark was on August 18, 2014) and I wanted to take a moment to share my workflow and some of the tools that I use to get shows recorded, edited, and distributed each week.

This workflow is for a one-man show that airs weekly, has a modest audience, and is produced on a Mac. This guide is simply an overview of the tools I use and why I have selected them for the job. Your show may have different needs, so don't take this as gospel, but I hope that it can serve as a guide for those who haven't jumped in the game yet.

If you're not familiar with my show, it's called Bite Size Tech and it's a weekly show where I discuss my favorite news stories from the past week in tech and gaming news in 5 minutes or less. That last bit is kind of a joke at this point though, as I have yet to get an episode under that 5 minute mark. You can subscribe right here.

This is the most straightforward part of the process, but it's one that you need to get right otherwise everything else in the process will suffer. I record on Sunday morning when my wife is still asleep and the outside world is quiet. I speak best when the day is new. I do even better when I exercise right before as well. This works for me, but of course you'll have to find what works for you. 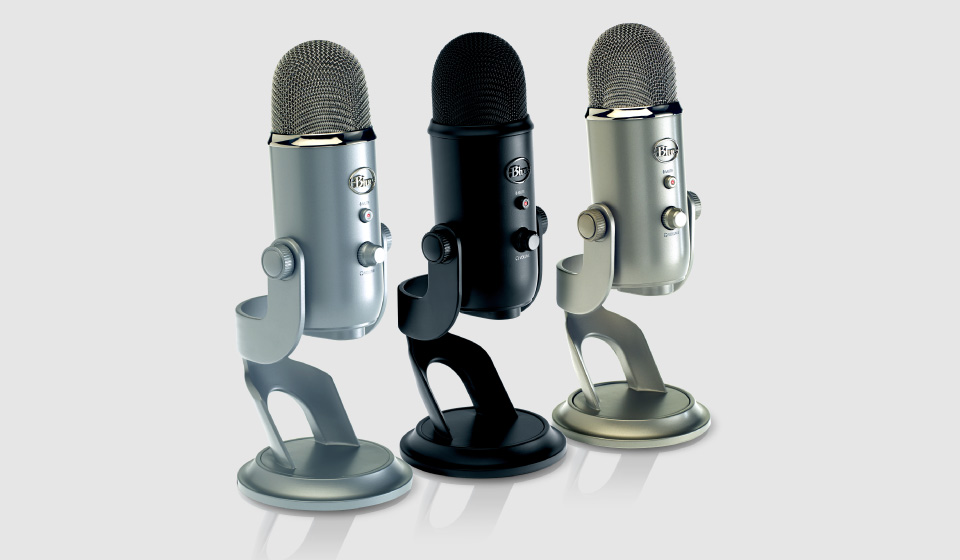 This mic is really fantastic. I know you can spend more and get something nicer, but I think this is more than capable for the vast majority of podcasters in the world. Even at $129, this is pushing the bounds of what most people want to spend on a microphone, so you may want to check them out on eBay where you can usually get one for less than $100.

I like that it is pretty forgiving, and has a few different recording modes so you can find the right one for your recording environment. It also works with OS X and Windows, so it's pretty darn universal (if you're podcasting from Linux, I can't help you). It simply connects over a mini-USB cable that also powers the mic. I don't use a pop filter or any pre-amp. 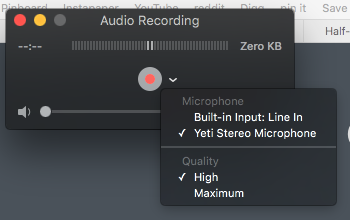 When in Quicktime, a quick Ctrl+Alt+Cmd+N brings up the audio recording interface. It's super easy, and is built into OS X so it's free. By default, QuickTime will save your recording as an MP3 file, but I would advise switching it to "Maximum Quality" mode which will save a higher quality track. It takes up a little more disk space, but it's not enough to really make a difference. 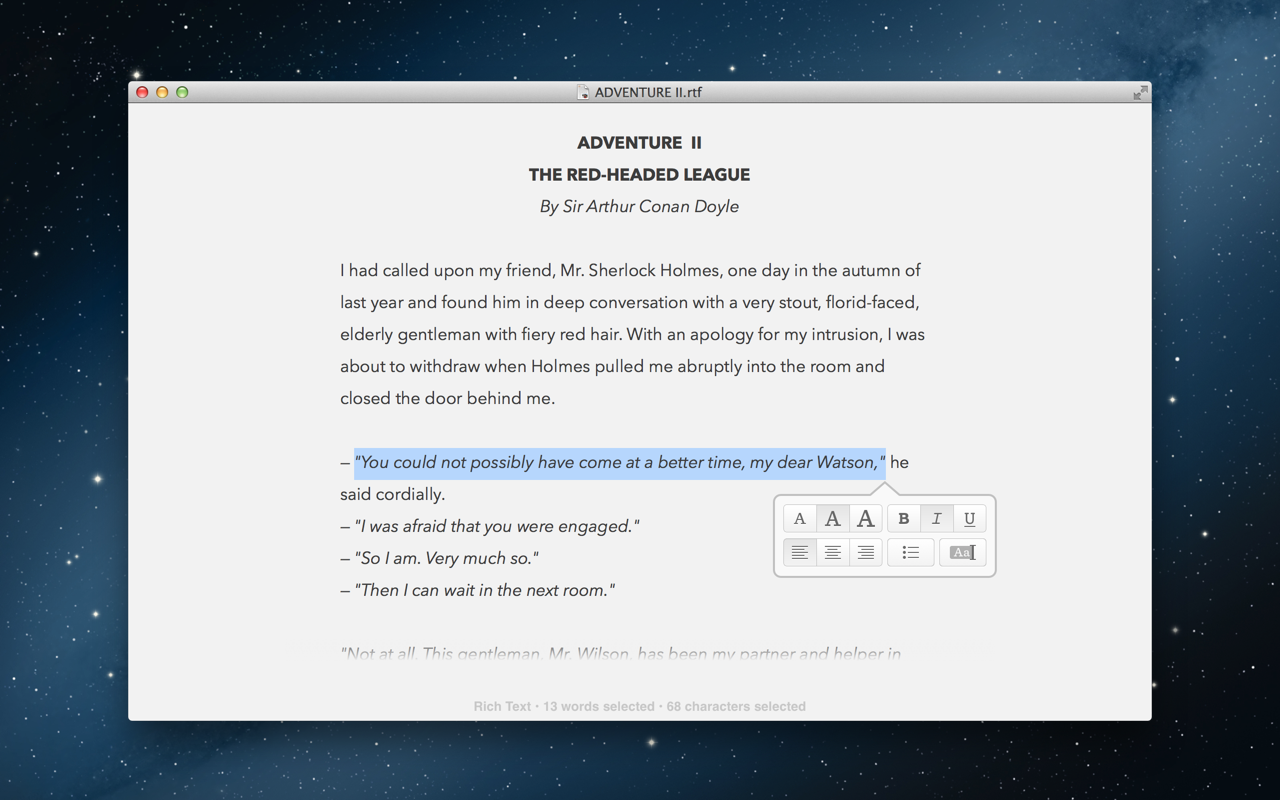 Unless you're an incredibly good extemporaneous speaker, you're probably going to need an outline. There are plenty of other apps out there that focus squarely on outlining, but I'm a markdown fanatic, so Byword is my go-to app for all writing.

This is where "the magic happens," as they say. Bite Size Tech is a one man show, but that doesn't mean I simply record my vocal track, pop some music onto the start and end of it and call it a day. No, there are many edits in my shows. I edit out content where I go off the rails (not okay when your shows aim to be 5 minutes), I remove pensive silences where I consider my next words (again, not ideal for a short show), and I manipulate audio levels to ensure I don't blow out my listener's eardrums when they're listening.

This process is going to be slightly different for those who do multi-person shows, but the general principles hold true whether you're recording on your own or with a group. 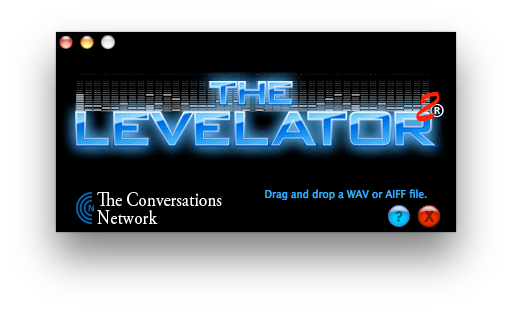 One of the things I struggled the most with early on in my recording was getting a level audio track. Your voice naturally rises and falls as you speak, and this isn't really a bad thing. You don't want to sound like a robot, but you also don't want to have your listeners fiddling with their volume while they listen to your show.

Levelator is a quick and easy way to eliminate a lot of those mountains and valleys in your audio. You can get fancier with more professional tools and plug-ins, but just like the Blue Yeti microphone, I think Levelator is good enough for almost everyone making a podcast.

NOTE: Levelator requires a WAV or AIFC file. MP3s will not work. 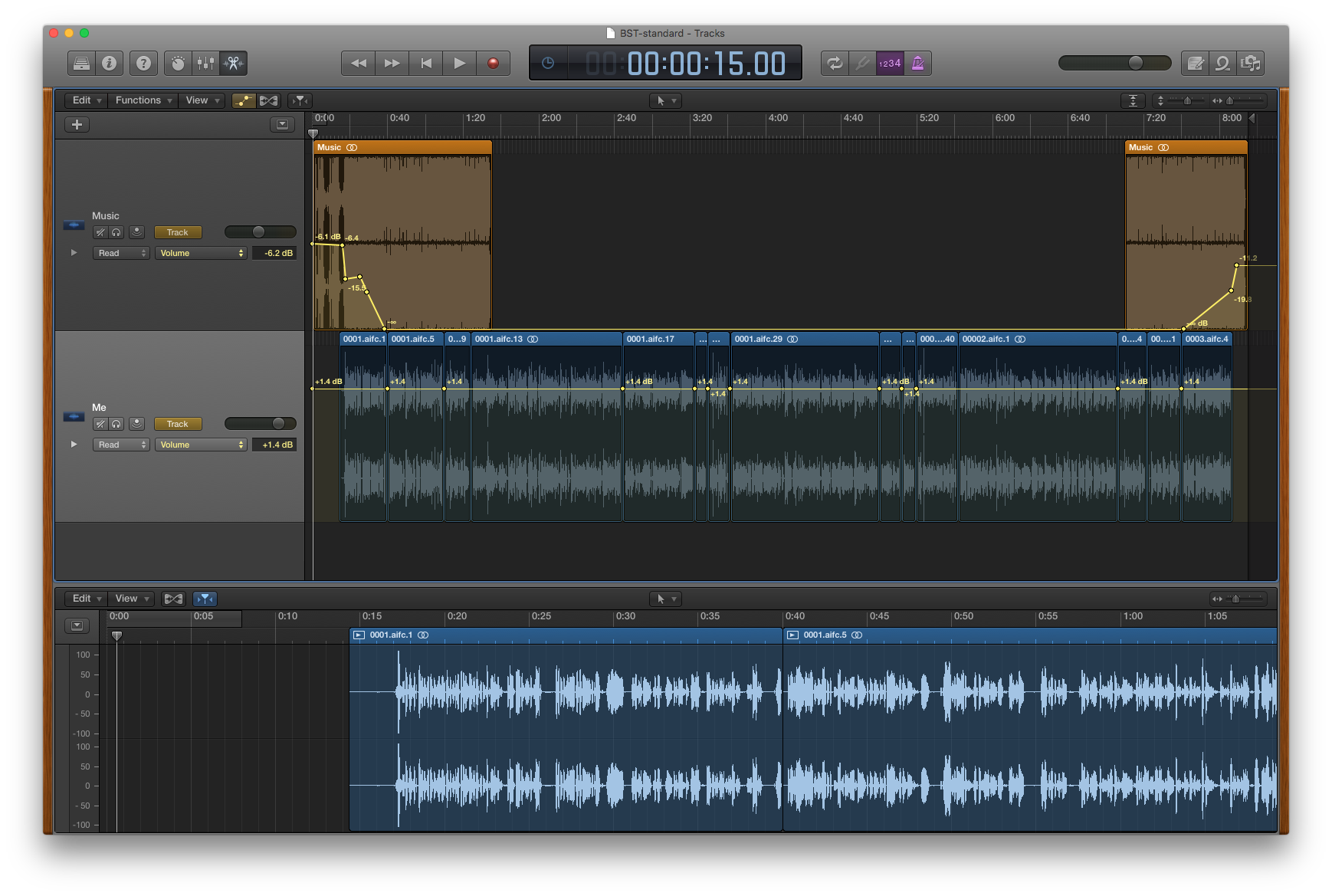 I don't use nearly all of Logic's features, but it is a great audio editing application that I have fallen in love with. I like that it is fast, has a good compressor built in, and has keyboard shortcuts for everything. What I don't love is mostly its price. $200 is totally fair for what type of product it is, but it's a sizable investment that you have to know from the start will likely not pay off unless your podcast does very well. 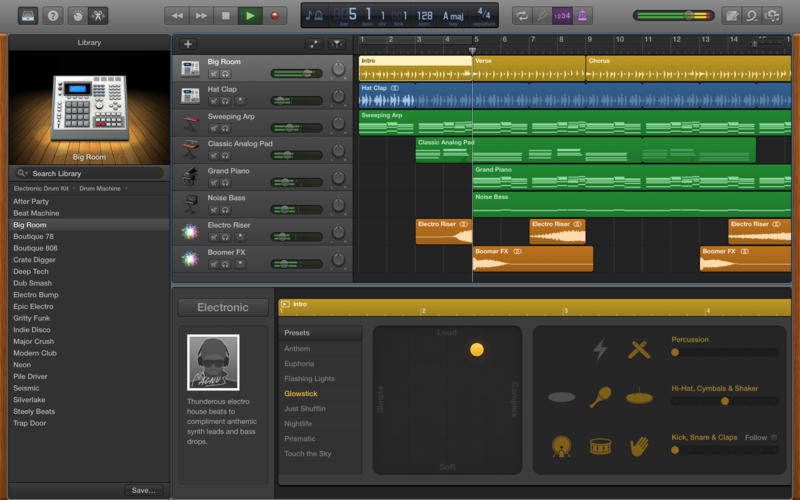 Garageband is bundled into every Mac, and is a good starting editor for podcasts. It's free and does basically everything you need. I used this for all my shows in 2014 and found it to be mostly satisfactory, but I was frustrated with how it handled track levels and long term, was anxious about its inability to be enhanced with plug-ins.

But make no mistake, GarageBand is an amazingly powerful free editing tool and it's awesome that Apple gives this away. If you're getting started, this is the tool you should try first; it'll get you far. 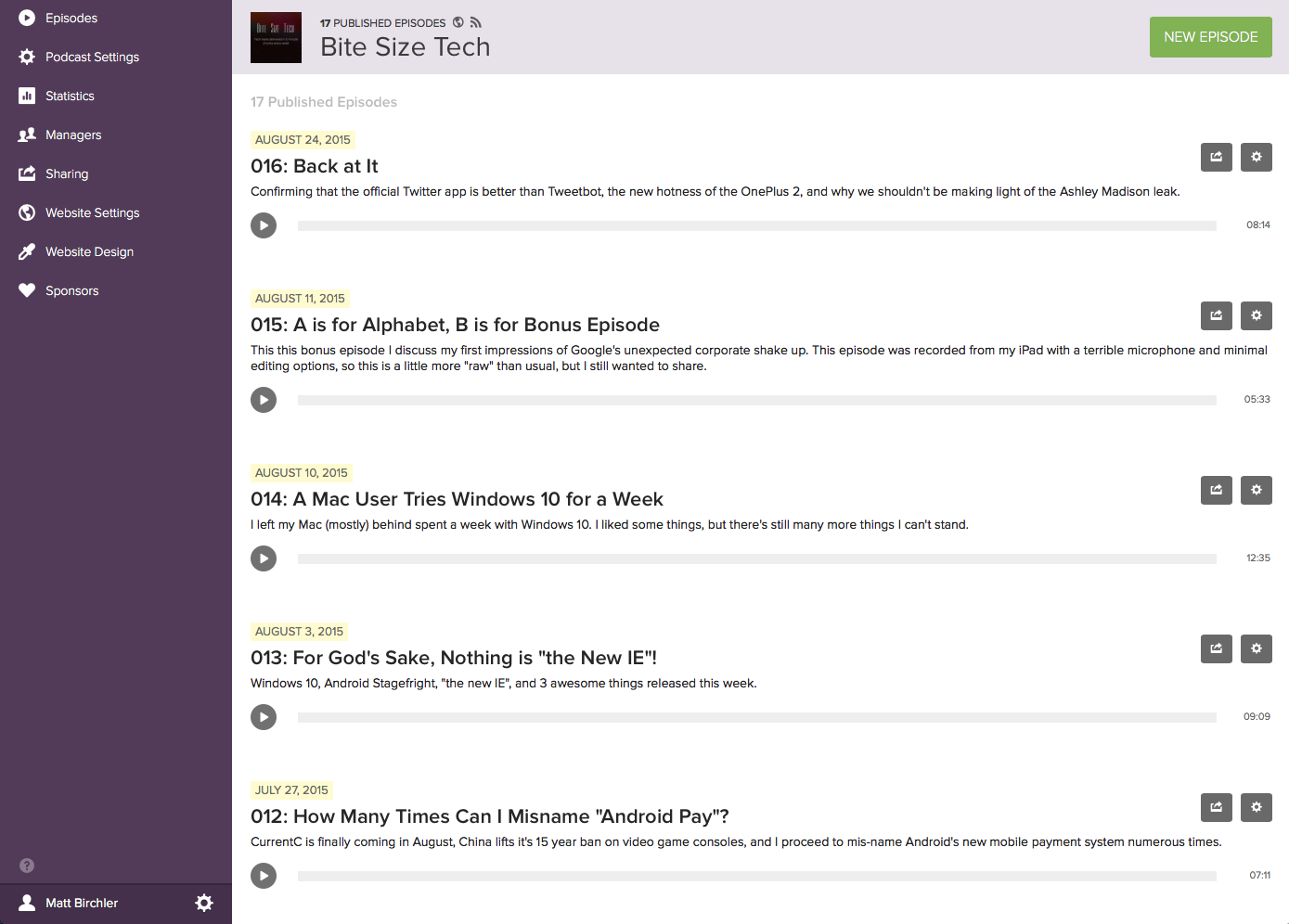 I've tried a few different podcast hosting solutions, and SimpleCast has settled in as my favorite. SimpleCast is nice because it's exactly as easy to use as its name implies. It has a nice UI for adding new episodes, it is reliable, and it has solid analytics data. At $12 a month, it is on the pricier side, but the fact that I don't have to worry about anything going wrong is worth the price for me.

Another bonus feature is that you get a free hosted website for your podcast. The default themes leave a little be desired, but you can fully customize it with your own CSS if you'd like. But how important is your podcast's site anyway? 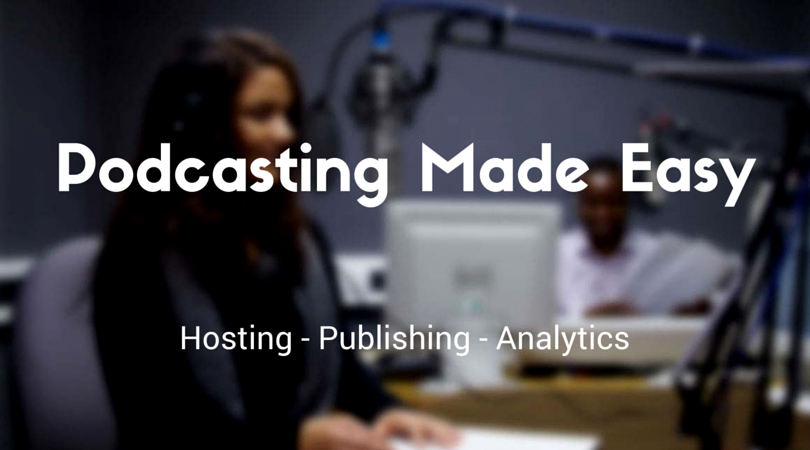 ZenCast is about to come out of beta, and it looks very promising as well. At the time of writing, ZenCast has fewer features than SimpleCast (no website, for example), but it looks like it is going to be a competitive option.

Updated: Turns out ZenCast is coming out of beta soon (hopefully) and has some pricing on their site, although aparently those prices have not been finalized. The service has also added hosted websites for shows since the last time I checked as well. Hat tip to G. Keenan Schneider on Twitter for the updated info.

Of course I also post an update to Twitter the day a new show goes up. I also make a post here with the show notes. If it's an episode I think non-tech people will enjoy, I also post it to Facebook.

The nice thing about podcasts is that most people subscribe to them, so getting all your Twitter followers to see a new episode is out is less important than some other digital content (such as blog posts like this one!).

One neat trick for podcasts is to post a link to them on Twitter a few hours, or even a day, after they go out to your subscribers. This gives people who already enjoyed the episode a moment to think, "hey, that was good, I'll retweet it!" Podcast episodes are a notoriously tricky medium to share, so think about how and when you are sharing your content to get the most return.

Podcasting is not that hard for anyone to do in 2015. You can use free software and nearly-free hosting to create a show. If you have something you want to share with the world, there's almost nothing stopping you. Podcasting has been around for over a decade and it still has tons of room to grow. You're not too late, it's actually a great time to get going.

Finally, I love listening to little, lesser-known shows, so if you make a podcast already, I'd love to hear about it. Leave it in the comments or let me know on Twitter.

The iPod Wasn't a Hit Immediately Either

Stephen Hall on why he doesn't feel too bullish on smart watches.…

Good morning, everyone! Video game fans, I hope you took the next…