How Many Times Can the Tech Press be Wrong About Video Games?

One of my pet peeves is reading a tech reporter discuss how video games are dying and smartphones are going to take over the gaming space. A quick Google search brought up this gem from M.G. Siegler:

Color me officially bearish about the latest generation of video game consoles. All the reviewers seem to want to love the PS4, but just don’t. [...]

We’ll see if the Xbox One fares any better, but it also sounds a bit too obtuse.

I’m sure these all will sell well out of the gate thanks to the holiday shopping season, but the real indicators will be early next year when the hype is gone and these things have to stand on their own merit.

So how have things gone since November 2013 when that was written? Pretty damn well. As I wrote back in May, the PlayStation 4 is outselling the PS3 by 76% and Xbox One is outselling Xbox 360 by 58%. The Wii U is languishing, though.

And if you wanted to see how the video game market in general is doing in terms of revenue, here's the past decade: 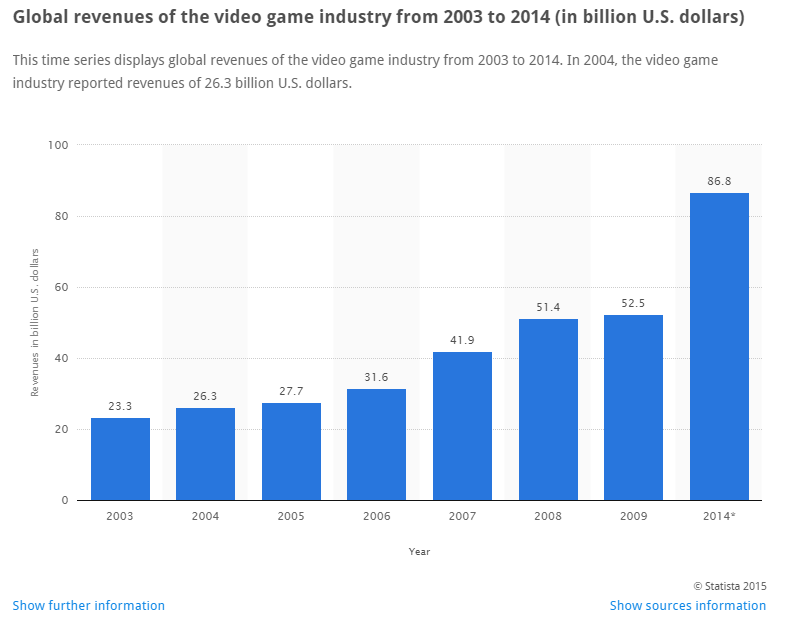 So when I see people suggest that the Apple TV's "casual games" are going to take over the video game industry, I have to laugh. Yes, there is always room for disruption, and a more mainstream crowd will tend to gravitate towards more simple games. However, I think the suggestion that sub-200MB games will be "good enough" for a general audience is absurd. It's like saying that blockbuster movies are dead because anyone can post a video to YouTube shot on their iPhone. For god's sake, we've had 4 huge movies make over $1 billion at the box office this year!

I think the new Apple TV looks awesome and I can't wait to buy one. I love video games and hope there are some really fun games for it. But if you think the traditional games industry is going to have a tough time going up against a streaming box with okay games, I think you're way off base.

Tim Cook's Apple is Still the Apple We Know and Love

Apple is Firing on All Cylinders